#52 Exponentiality of mild and wild randomness

#52 Exponentiality of mild and wild randomness

The Black Swan: The Impact of the Highly Improbable by Nassim Taleb, pages 135-189

A thought I cannot get out of my mind is Taleb’s remark about prediction errors concerning age and human projects and ventures. According to Taleb’s (2007, 159) reference to insurance forecasting, women from developed countries are expected to live until 79 years old. If they live to 79, they’re expected to live another 10 years. At age 90, another 5 years; age 100, another 2.5 years, and age 119, another nine months.

Regarding human projects and ventures such as the construction of a building, if the projected completion time is 79 days, and it’s still not complete, then it will take another 25 days to complete. On day 90, add another 58 days; day 100, add 89 days; day 119, add 149 days; and day 600, add another 1,590 days. [I’m not sure where he’s getting his information on this; let’s just assume his numbers are correct.]

According to Taleb, something like biological age is a non-scalable event or process from Mediocristan; the construction of something by humans is from Extremistan and thus prone to scalable and unpredictable Black Swan randomness. The first obvious difference between the examples of age and construction is that age is not a wildly random event; we know that most women are going to live between 70 and 90 years at an average of 79 years. We have good data to back it up (although Taleb would remind us here to not only look at past data and events). On the other hand, a construction site is highly unpredictable because any number of events could impact its date of completion, from a terrorist attack, a pandemic, flu season, intense rain, a worker’s strike, a death on the site, an event linked to the production or transport of the raw materials needed to complete the project, etc. While a person could be hit by a bus or chokes on their dinner, we have stable numbers of people’s ages at the time of their death and Mediocristani events are determined by mild randomness, unlike the infinite possibilities that push back a project’s completion date by wild or superwild randomness (see the chart below from page 36). 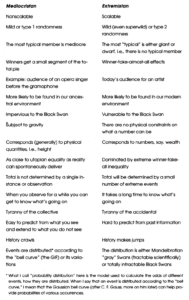 With regard to prediction errors or margins of errors, what psychedelic variables are mildly predictable and what happens when things are wildly random and increase through time?

Off the top of my head, we can predict the half-life of substances, that is to say, the amount of time for the body to excrete it. For example, if we know to a good degree of certainty that the half-life of ibogaine is 7.5 hours in humans (Alper, 2001, 21), then we have a better idea of its physiological effects and can test the body for traces of substance every 7.5 hours. Additionally, we can also test the visionary half-life of iboga and compare it to its physiological correlate, that is, how long psychedelic visions persist, at what intensity, and at different dosages. Another thing to consider regarding iboga’s predictable half-life is a person’s percentage of adipose, or fatty, tissue since iboga sits in these cells for an extended period after ingestion and is slowly released by the body. Therefore, iboga would likely have different effects on someone who is overweight compared to someone with an athletic body type. Age, diet, previously consumed and stored substances/toxins, and the existence of vitamins or lack thereof would likely also have different effects on the iboga experience. And I’ve only touched on physiological aspects here; there are of course numerous sociocultural and mental aspects that need consideration.

I think the last sentence I wrote above is a good point: if we were to apply Taleb’s (non)scalability of Black Swan events, I would argue that physiological issues fall within the domain of Mediocristan because they are less random (i.e. more predictable) and more under our control, while mental issues pertaining to sober and intoxicated states of mind fall within the domain of Extremistan because they are wildly random and less under our control. I can only speak for myself, but I imagine my next thought also applies to other fellow humans: the sober mind is difficult to control, let alone the psychedelic-intoxicated unconstrained mind. From my own experiences across a range of psychedelics there have been some truly spectacular sublimable events, indeed, Black Swans. I had never seen such things or had such thoughts like those I experienced. They were beyond my imagination. But now that I know them, they are no longer unknown, they are in my mind, and they will probably/hopefully lead me to discover further the mind’s domain. What are the limits to the imagination? There are probably none; it’s probably infinite. So, the imagination and the mind on psychedelics, unlike the half-life of iboga on the body, is Black Swan-prone and people should prepare themselves to expect the unexpected.

As well, upon considering mild and wild randomness regarding the decreasing and increasing exponentiality of variables from Mediocristan and Extremistan respectively, I’m interested in exploring the exponential increases of visionary content produced by the infinite human mind and the capability of its imagination. When do visions and thought patterns spiral out of control, regardless whether they are pleasant or disagreeable to the experiencer? How does a vision or thought pattern lead to the next, usually constructed and presented within an elaborative narrative? It is this spiraling that interests me most; the causal links in hyperdimensional chains, from present and previous sober and intoxicated experiences.