For the last two days, Friday and Saturday, all day, each day, I attended the Universal Ibogaine Conference put on by Microdose.buzz. It was pitched as a “Molecular Masterclass,” and the byline read: “The Ibogaine Conference: Molecular Masterclasses bring together the leading researchers, scientists, doctors, practitioners, and attendees in a comprehensive and interactive virtual setting for a multi-day conference.” Excellent. Right up my alley.

This was the first iboga(ine) conference I ever attended. At any given time, and depending on the talk, there were anywhere from 50 to 150 attendees tuning in, asking questions, and offering live comments in the chat box. I enjoyed the interactivity of an online conference, constantly switching between modalities, listening intently to what speakers had to say and thinking of questions to which I would like an answer or opinion. I asked questions to most of the speakers. At one point I thought: am I asking too many questions and not letting others ask? And then I reminded myself of a few of things. First, someone might have the same question as me but doesn’t want to raise their hand, in which case this would be a lost opportunity to find out some information. Second, someone might not have any questions to ask speakers, but realize that they too would like to know the answer to my question I just asked. Third, I’m just a very curious person and I host my own podcast, so of course if the opportunity arises to ask leaders in the ibogaine research and advocacy community a question, yes, this is partly why I signed up! Even though the speaker and I can’t have coffee and chat to hash out the minor details of my question and their answer as would happen at a brick-and-mortar conference, and the speaker doesn’t know that it was me who asked the question, it was still a great experience to engage with speakers and attendees in real-time. 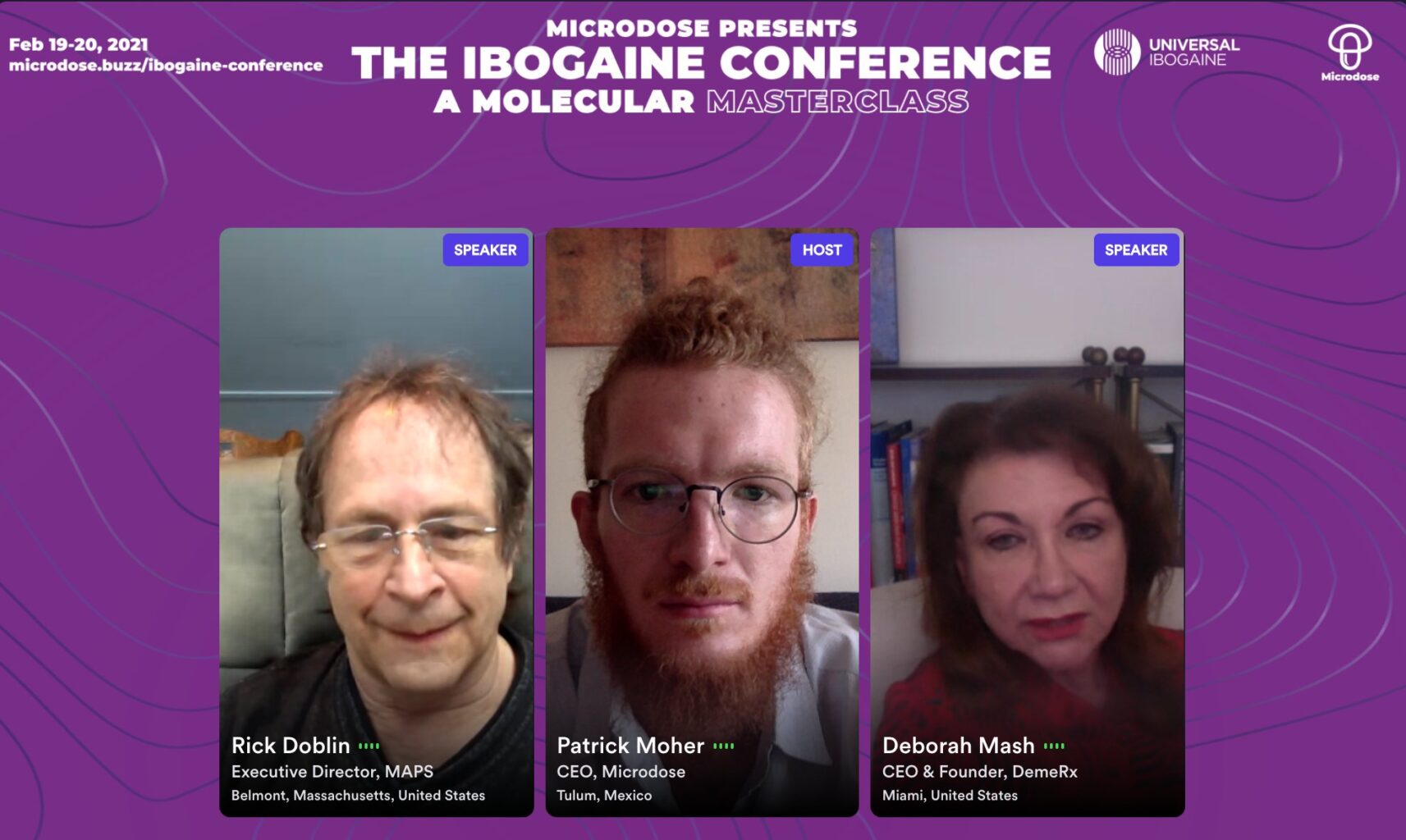 There are so many perspectives and voices in this community. I found it interesting there weren’t enough, in my opinion, Gabonese/African speakers/attendees who work with iboga in some way, either farming, religious, advocacy, etc. The obvious reason for this is likely language barriers, since the part of Africa from where iboga comes and is used is mainly French speaking. As well, the $50 ticket might be a barrier to participate as well, since I imagine $50 may be a lot of money for these same people, in addition to needing a good computer to stream the event and access the platform. I would like to see future events having more perspectives from traditional users and practitioners of iboga. In short, the topics presented by speakers were diverse; however, I would like to see a more diverse crowd of people presenting and attending. And I say this to whomever hosts ibogaine conferences in the future. We (Westerners) cannot have a one-way conversation on the topic of iboga, only speaking to ourselves in a kind of echo-chamber or filter bubble, considering iboga products come from a very small area of the planet, namely, (primarily) Gabon, Cameroon, and Congo. The question then is how do we incorporate more African perspective into future conferences? Another idea would be for the Gabonese to host an online or in-person conference on iboga to turn the tables around: a Gabonese-hosted conference that invites Western perspectives. I’m aware of a 2014 iboga conference happening in Durban, South Africa, however, hosted by the Global Ibogaine Therapy Alliance, a Western organization and seemingly focused on therapy. I’m simply offering some different perspectives and suggestions that I would like to see at future conferences regardless of where in the world they’re hosted and what the central topic is about.

With that said, I was impressed by the seamlessness of and easy-to-use platform that Microdose.buzz and Universal Ibogaine used to host this latest ibogaine conference. I learned a lot, connected with some amazing people, and was among a group of people all tuned into the same channel, so to speak, for a couple of days to hear about a common interest in ibogaine. For me, that was the greatest part. I liked the real-time contributions of people, such as posting comments, making me aware, or I making someone else aware, about a bit of information that could potentially help each of us on our journey and the application of that information and perspective in whatever way each of us is interested in this substance.

Finally, the price point was great, $50, since I didn’t need to spend thousands of dollars on airplane tickets, hotels, and meals, all those expenses that come with travelling. I would definitely attend an in-person event when Covid-19 dies down, perhaps oscillating between more online conferences and the once-in-a-while in-person event. This conference is over and I’m already looking forward to the next one. Now I shall focus on releasing Season 3 of the Iboganautics podcast… tomorrow!