Hey everyone, just got off the phone with Dr. Claudia Schwarz-Plaschg (last name very difficult for me to pronounce, you hear me butcher her name in the episode, sorry Claudia) and I think I can speak for both of us… that was fun! There was so much we could talk about, unpack, flesh out. There were so many conversational avenues to stroll down that at times it was difficult for me to choose where to go, what thing I wanted to know about next, etc. And her resume/CV is something else. She has studied or has been a visiting researcher at so many top-notch schools that you know she knows her shit. I can’t remember if we said it or not but shout out to our mutual friend Alice who connected us. Alice and I studied together in The Netherlands during our master’s degree. And then Alice and Claudia met at the Dimensions of Political Ecology conference on a panel. Alice suggested I contact Claudia, but Alice had no idea that I started this project, that is, AMhouot.com, the blog, podcast, etc., so when I launch in May Alice will be surprised. Thanks again. 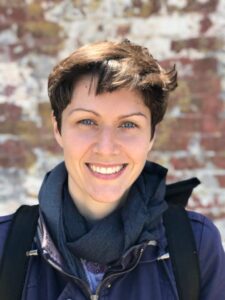 First, before you listen to the podcast I highly recommend you watch the short lecture presentations she gives at various conferences wherein she presents her work, especially the Breaking Convention because she does a good job at breaking down the ins and outs of what she’s up to.

Second, her latest paper, The Power of Analogies for Imagining and Governing Emerging Technologies (2018), gives no mention of psychedelics or altered states of consciousness, in fact, the example is nanotechnology. Whether she knew it or not at the time, I can understand how her work on analogical reasoning and argumentation concerning the assessment of emerging technologies strongly informed, I would go so far as laid the foundation for, her current work in the re-medicalization of psychedelic substances. I didn’t get to it, but I wanted to ask her about Lakoff & Johnson’s (1980) wonderful book called Metaphors We Live By. In their book, I was fascinated by the granular detail and deconstruction of how metaphors permeate language and how we think about one thing in terms of another, and it all seems to make perfect sense. In my own work, I’m reminded of the Dutch applied phenomenologist, Max van Manen (2016), who cites another Dutch phenomenologist that says phenomenology is the science of examples. Examples can take on many forms, from similes and metaphors to analogies. What interests me about the “power of analogy” as Claudia says in her paper is how we can think about something in terms of something else and what we can draw from the analogy in positive and negative terms. Negatively speaking, and Claudia touches on this when she speaks of our responsible use of analogies, is how we can twist an example to further our own bias, agenda, or to add to the persuasiveness of our arguments. Super futuristic or science fiction-like speculation is not healthy either, but it seems that technology advances so rapidly today that it is worth thinking about “Black Swan” (see Nassim Taleb’s [2007] fantastic book) events. She compared the coronavirus (COVID-19) to an altered state of consciousness in that our everyday world has been turned upside down (until further notice). Coronavirus, yup, I’d say that’s as black of a Black Swan as 9/11 was in 2001. I like to wildly speculate even though I might not publish or speak of my ideas. The point I’m trying to make is that we should be aware of how we use analogies and for what purposes, to be (more) reflective of why and how we compare one thing with another, especially relevant within discourse revolving around psychedelics.

Third, sorry Claudia for asking such a densely packed question, I didn’t mean to put you on the spot, but I just couldn’t help myself, I had to know what you thought about this: Can you explain the conceptual leaps between sociotechnical systems, sociotechnical imaginaries, and socio-psychedelic imaginaries? If you read this, I think this would make an interesting journal article for the STS community in particular and for the rest of interested psychedelic nerds. Please write this paper. Yes, I am begging, only because I want to know more! and I think you’re the one who can explain it to us.

Fourth, I wanted to speak with you more about Foucault’s Technologies of the Self. Somewhere in my notes from years ago I opined that Foucault should have spoken about “cultivating the self” and “caring for the self” as techniques or technē of the self, not as technologies. While we can lump technique and technology under the same ancient Greek umbrella term technē, what Foucault speaks about, at least for me, would be what we call technique. For me, the traditional use of the term technology is something that is human-made, some kind of constructed artifact in a four-causes Heideggerian sense (see Heidegger’s The Question Concerning Technology). I agree that we can think about psychedelics as technologies if we consider their instrumental value, especially synthetic substances such as LSD since it was synthesized, i.e. not found in nature. Now, I agree with your views, however, my views are at present pluralistic depending on how I use the metaphor “psychedelic-as-technology.” One of the things I wonder, which we spoke about and following Foucault’s above views, is this: if Foucault speaks chiefly about “techniques” of the self (my interpretation), then what technologies can we use with psychedelics to rediscover or transform the self? Let’s go one step further and ask: what (psychedelic—technique—technology) combo could we create and for what purpose? There are literally infinite combinations on this spinning lock, however, to unlock what? To unlock a particular type/version of desired/undesired self? To unlock some kind of knowledge from altered realms? I think whomever will be the first to experiment with various psychedelic—technique—technology combinations in addition to other manifold variables at one’s tweakable disposal will discover something. As we spoke about after our recorded conversation, my view is that we are like monkeys playing with hammers. I argue that psychedelics do something, have value for something, but we are unaware of its purpose for us, its full capability, its full potentiality, its co-shaping and co-emerging partner status for us.

Fifth, in the Breaking Convention you say that the field of STS is exploring the ways in which science, technology, and medicine are co-emerging with society at the same time and how each shape each other. Have you looked into anthropological studies that maybe document how these substances co-emerged within indigenous societies? I think there’s something to learn from traditional societies’ worldviews, considering they’re hundreds or thousands of years ahead of us regarding the integration of psychoactive plants in their cultures, and thus, we can see how our Western society, starting from today, might evolve with these substances. And do we want this for everyone or for certain, perhaps elected, individuals such as shamans and medicine men and women who, to the best of my knowledge, do not want such roles but are chosen to be future healers for the benefit of the community.

Finally, I had a prepared question that went like this: Once everyone gets comfortable with the psychedelic-as-medicine approach, what is next for psychedelics? What will be the new angle for which people will advocate? Ok, now I’m questioning myself whether we spoke about this or not! I can’t remember. Anyways, I believe the medicalization of psychedelics will become normalized by the next generation. Once this happens, what will people fight for next? The most likely thing people will fight for is the safe and responsible use of psychedelics for “healthy normals” like myself: people who are not sick both mentally and/or physically. I think of such people as wanting to take psychedelics to explore their own mind, to have a greater sense of trust by the society to do so, which would lead to a greater sense of cognitive liberty (cognitive liberty will be discussed on Iboganautics; keep an eye out). Another angle that we also discussed was psychedelics-as-exploration. This imaginary is the most interesting to me. This imaginary screams of pure research, badly needed in academia in my opinion and one of the reasons why it is so difficult for people like me to conduct the kind of psychedelic research I want to do within the parameters of an academic framework. At least two factors prevent such research at the moment: funding and utility. Who’s going to fund pure research into psychedelics, that is to say, the academic or study participant taking psychedelics just to take it and let’s see what happens. Even Strassman’s (2001) famous DMT study, considered pure research to a great degree, had a purpose: to study basic physiological effects of DMT use in humans. I’m arguing for even purer research than that: just to take it and report back on what one experienced. I realized that in order to get funding, any kind of pure research must be done on my own time and dime, and when I have a deliverable, a particular discovery that can be replicated, only then will a research institute (public or private) fund that particular thing I discovered. Subsequent discoveries are likely from this point onwards, but only when there is first a known phenomenon worth spending money on. Strassman made many unexpected discoveries about the DMT state only because he first had funding to study DMT’s physiological effects. Second, is the idea of utility. Funding bodies likely think in terms of return on investment; what use is this knowledge to academia or society? My first podcast guest, Yann Guignon, told me he was disappointed with some wealthy investors/donors because they asked him what their return on investment was. Puzzled, he told them, this is not an investment, it is a donation with nothing in return except for knowing that he and his team at Blessings of the Forest fight for iboga’s survival against illegal poaching and climate changes. So, this is what I’m up against personally. But I’m committed to continue until I find that thing that will get people’s attention and therefore the funding I desperately need to accelerate my project in decoding the state of consciousness that iboga occasions.

Thanks again Claudia for the chat, I look forward to seeing how your research progresses and your conclusions.

For those interested in (a more analytic) philosophy of technology, and, sociotechnical systems, see: