What a conversation with Greg Lawrence. He’s so knowledgeable about these matters, particularly microdosing iboga, in addition to how and why we should consider paying more attention to integrating our psychedelic experiences. Some afterthoughts from our conversation:

Point 1: I really liked the term he used to describe post psychedelic experiences, the “pink cloud.” I knew of and use the term “afterglow.” I suppose immediately after all of my podcast episode conversations I’m in a pink cloud kind of mood/state. I’m always buzzing, talking about a topic that is close to me and that I’m passionate about, especially when your conversation partner is as knowledgeable or more than yourself about your passion or a peripheral subtopic related to your main passion. If anyone knows who originally said this pink cloud term, please leave a comment below. As well, leave a comment if you know of other synonyms that are related to afterglow in the context of psychedelics.

Point 2: Greg said that when he became re-acquainted to psychedelics later in life, he was excited and thought that they would change him, but they didn’t live up to his expectations, perhaps leaving him with some insight but no major changes. I have experienced this feeling as well; I imagine many people taking psychedelics for the first time or re-acquainting themselves with these substances have probably felt this at one point or another. As Greg says later in our talk, we should focus on an intention for the experience, not an expectation. We must ask why are we using this tool; for what purpose? I would venture to say that Greg’s initial disappointment at psychedelics’ believed panacea potential led him down his current path, that is, being a psychedelic integration coach and expert. He learned first-hand through his own disappointments how to treat these experiences, and then, as is evident, he took what he knew and became a teacher, guide, and healer, not only with psychedelics but other means as well. Further, just as I would never have believed after seeing Greg speak in Seattle in January 2019 that one day I would start a podcast and invite Greg on that very podcast, Greg probably didn’t think he would transition from his previous profession and life to the one he currently lives now. 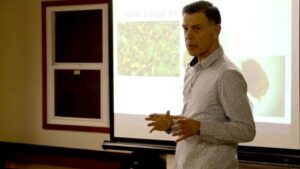 Point 3: I would like to speak about recreational users. In borrowing one of his friends’ terms, Greg calls these users’ experiences “celebratory.” The pendulum has indeed swung too far in the opposite direction from the wild 1960-70s psychedelic users’ motives. If you appreciate open-mindedness from others to be able to take these medicines or however you choose to analogize them, then please do not judge people taking them for fun (safely and responsibly) in a recreational/celebratory way. They can be fun, they can be entertaining, and they do not have to be primarily associated with the medicine/therapy/healing analogy. I will write more about this in my upcoming book.

Point 4: While I agree with Greg’s point that combining different substances together is possible, and that not doing so or thinking in terms of shoulds and should nots, is mainly a human construct thereby potentially limiting and excluding experiences from users, I must admit that I am a psychedelic “purist,” meaning that I prefer to take one substance at a time. I may try combining substances once just to know what it’s like, especially Greg’s iboga microdosing with cannabis method, but for the most part I like to feel the effects of one substance. With that said, I’m being contradictory in what I just wrote considering iboga affects multiple receptors in the brain at the same time, such as serotonin, NMDA, and kappa opioid. Serotonin-effectuating substances are classically found in ayahuasca or mushrooms, ketamine for NMDA, and Salvia divinorum for kappa opioid. Similarly, who uses let alone has separate mobile phone, camera, and Internet-connected devices anymore? A smartphone now has all of these features plus more in a single bundled device. I suppose another reason why I like consuming a single substance rather than combining them is because I know better what to expect from the experience. Of course, if I combined microdoses of iboga with cannabis multiple times, eventually I would be able to predict what would likely happen at some point during the experience, but I would still wonder about how much predictive power I’d be giving up by combining substances.

Point 5: Greg said that his iboga microdosing plus cannabis catalyst experiences usually peak at the 2-hour mark. I find this interesting because my first vomit usually peaks around that time when I ingest a flood dose of TA extract. What does this mean? I reckon it has something to do with absorption levels by the body. Perhaps the 2-to-4-hour mark is when most of the iboga has been absorbed by the body, that is to say, there is maximum absorption and thus maximum altered state effects.

Point 6: I liked Greg’s point that if you take a psychedelic with a healing intention or you want to change something about yourself, and in fact you have not changed from the experience afterwards, then you haven’t learned anything. According to such a view, you wasted an experience, or as Greg would say, it’s akin to watching a movie; there’s nothing wrong with just watching a movie, but if you want to change something about yourself it is up to you to take the initiative. You must be willing first to recognize whatever message, lesson or insight came to you during your experience, and secondly, to change that thing you wanted changed or the previously unthought-of insight that came to you, if you choose to do so.

Thanks again Greg for teaching us about iboga microdosing with cannabis and your approach to preparation and integration of psychedelic experiences.

You can find Greg online at the following links: