The Black Swan: The Impact of the Highly Improbable by Nassim Taleb, pages 253-305

Chapter 16 was one of my favorite chapters because Taleb finally introduces a method to grey-ify the Black Swan, albeit not fully, but still noteworthy. He draws on the work of Benoît Mandelbrot, the Polish-French mathematician known for his research on fractal geometry, the geometry of the “rough and broken” (Taleb, 2007, 257): “The key here is that the fractal has numerical or statistical measures that are (somewhat) preserved across scales—the ratio is the same, unlike the Gaussian” (ibid., 260). The Gaussian method refers to the Bell curve chart that represents a more-often-than-not equal distribution of ratios to the left and right of center, the center being where the highest concentration of variables eventually falls. Taleb argues throughout his book that we do not live in a Gaussian world because if there have existed outliers in the past, we are sure to experience more of them in the future, and Bell curves do not account for them. 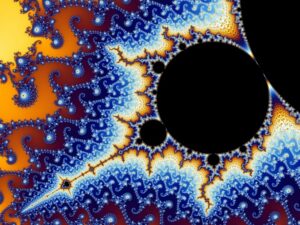 But now, according to Taleb, we can consider Black Swans in the context of fractal geometry. The ratios are preserved throughout the entire set, therefore the numerical/statistical measures account for the “blip” in the data, which is the Black Swan, and such a blip repeats throughout the set. This shows that the part and the whole represent each other (also reminiscent of Husserl’s phenomenology of parts and wholes, and holograms), they are the same, irrespective of scale (remember that Taleb likes scale/scalability because it better represents the notion and expectation of Black Swans). “As a matter of fact, complexity theory should make us more suspicious of scientific claims of precise models of reality. It does not make all the swans white; that is predictable: it makes them gray, and only gray” (Taleb, 2007, 268).

The reason some swans are grey in the context of fractal geometry is because we know that if they existed in past data sets, we know for certain they will rear their heads in future data sets; what causes them and how significant they become is unknown. It seems therefore that Mandelbrotian geometry is a viable model that accounts for Black Swans to exist because it doesn’t rely only on induction.

Much psychedelic imagery draws on fractal geometry and its resultant, beautiful fractal art. Why is there a connection between fractals and psychedelic visions? Anyone who has taken medium to high doses of psychedelics, especially the tryptamines, likely has seen some kind of fractalized visions in their experiences; it’s a commonly reported phenomenon, hence the reason why fractals show up so much in psychedelic art. (One could also argue that fractal art is so trippy that people began seeing these images in their trips post Mandelbrot, hence, a causality dilemma, but I don’t think this latter argument is the case.) Psychedelics seem to do something to visual perception that creates geometric fractal images of the objects we see in our world, or to the observable pixilated phosphenes seemingly underneath our eyelids.

Have you ever seen images comparing the brain to the universe? They are wonderful to look at; they have the same network-like structure. If there is a visible structural connection between our brains and the universe, if our brain’s network of neurons (the part) is representative of the structure of the universe (the whole; to the best of our knowledge it’s the whole), then, what does this suggest about Black Swans in a psychedelic-fractal-geometric context? What is the Black Swan equivalent in psychedelic visionary experiences? This is a question of ultimate significance.

Do most psychedelic-fractal-geometric images behave in the same ways as White Swans, that is, the expected humdrummery of most psychedelic visionary contents (note: nothing is humdrum about psychedelic-induced visionary content, but…), and further, if we assume the above, then, the Black Swan of psychedelic visionary content must be so fantastical that it defies logic, and per Taleb’s definition, it must “lie outside the realm of regular expectation,” “carries an extreme impact,” and explained after the fact (2007, xvii-xviii). Such an event will likely be discovered by accident, and it will likely be brushed off as mere hallucination, a figment of one’s imagination not worth considering further. Additionally, if Black Swans are “baked into” the data set, as suggested by fractal geometry, then we must ask: how often, temporally speaking but also due to complimentarily combined variables, does a psychedelic Black Swan arise?

I end this stream here because now I’m thinking of ideas that I want to put in my book. You will be able to read more about this in due time.