#107 In search of sparks and formulas

#107 In search of sparks and formulas

I found myself back in Enschede, Netherlands, last weekend. It was a convergence of occasions that made the whole weekend packed and fun. First and foremost, my master’s degree friends (those who could make it) and I gathered for a little reunion after about three years since graduation, at least it was three years for me. Second, we attended the annual technology festival called GOGBOT hosted by the city. We saw art installations, walked, talked, and enjoyed drinks in the chaos. It was a lot of fun. Third, my friends Patty and Alice organized a mini seminar for current students in our program (MSc Philosophy of Science, Technology and Society) to show them what one could do with this education and what each of us had been up to since graduation. Each talk was no longer than 10 minutes—very casual. 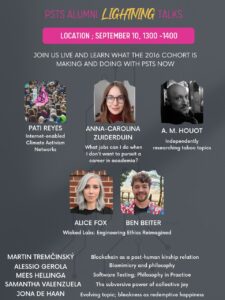 One of the common themes on which we all agreed was that after graduation we all ended up in a “black hole” of sorts, not really knowing what the next step would be. Studying for the thesis is so intense that your life becomes consumed by it, and then once it’s out of your life and you have your grade/diploma, what then? What job or interest or cause should you do? We all felt the same regardless of finishing a master’s thesis or PhD dissertation.

Although I still want to do a PhD and was actively seeking one in 2019, I realized that I’d likely be in the same situation after completing a PhD. In 2019, I decided to attack my existentialist concerns, to figure out my next step in life whether just finishing a master’s or PhD. The plan I’m following now could not have been figured out had I started a PhD. It was a blessing in disguise to sort out my major life goals now, of which a future PhD is a component. I feel like I’m working on what I’m supposed to do, and I have a plan to get me where I’m going. A 10-year plan to be precise, one plan at a time.

Had I had more time to tell the current students what it’s like to independently research taboo topics such as psychedelics I would have told them about my discovery of “personal development” (e.g., the likes of Jim Rohn, Les Brown, Napoleon Hill, Simon Sinek, Carol Dweck, Angela Duckworth, Malcolm Gladwell, and countless others). In short, personal development is a life philosophy that encompasses life-long learning, training your mind and outlook to be positive and conditioned for growth rather accepting a static mindset, and to continually pick up skills that will make you the best version of you. Moreover, and more of a comment for critics of personal development, you cannot have two voices in your head at the same time. I choose to consume this type of material to silence that negative/critical voice each of us are born with, thus filling my mind with positive and constructive ideas to make me better.

I first discovered personal development in late 2019 while I was putting together the puzzle pieces of my first 10-year plan, which began in January 2020. Since what I want to accomplish is ambitious, I found myself turning to motivational videos on YouTube to keep me inspired. These talks mostly were by successful actors, artists, and entrepreneurs recounting their stories of how they reached the top of their fields. I heard a story (but can’t remember who said it) that success – however you define it and whatever you envision that to be – is like reaching the top of a mountain. There are infinite paths up the mountain, no two paths are alike. Thus, while realizing that I’m on my own path and that my path will be unique from other people’s stories, I study these successful people’s rise to the top because I’m curious what they did and whether their experience can be replicated. I’m looking for a formula to success.

The example I give to people when talking about this topic is a blazing fire. Imagine a pit near a camping site. This pit is for making fires. This pit is mostly dirt at its base surrounded by stones. Over time we add things to the pit so that we can make a fire: large wooden logs vertically buttressed against each other, followed by kindling, then some dried grass, then some newspaper if you have it. What I’m curious about is what I call “the spark.” After putting in all the ingredients necessary to make a fire, all it takes is one spark, one match to light the thing ablaze. That’s what I’m searching for. Read for yourself on Wikipedia the story of any successful or well-known person. Study their story. Each worked at their craft before bubbling up to the collective’s conscious, or put differently, before appearing on the collective’s radar. One thing is certain: you must do a lot of work before an intentional or chance occurrence happens that ignites the fire you’re building.

Another possibility includes doing years or decades of work and perhaps dying before anyone appreciates what you have done. It’s possible that nothing will come of the work you’ve done. It’s possible that your work will inspire no one or so few people that in the end it really didn’t matter at all. But it mattered to you, and that is the most important thing. You do you, and I’ll do me, regardless of what comes from it. I’m inspired by the life of Dutch painter, Vincent van Gogh. Yes, he was a bit odd, even chopped off his own ear—probably because of drinking too much psychoactive absinthe, and apparently shot himself, eventually leading to his death. He was just starting to make a name for himself before his death but was far from the reputation he has today after his death. Van Gogh inspires me because of how bizarre it is that he did what he did most of his life as a penniless painter, a literal starving artist, yet now his paintings are sold for millions of dollars. It seems that some people’s works are not appreciated in the time they’re alive, yet future generations, with the benefit of hindsight, see just how amazing the work is. Are you willing to take that bet? Are you willing to keep on keeping on with the thing that piques your interest, even if there’s no payoff or recognition while you’re alive? I am. For me, it’s not about that. I don’t care about being known, liked, or cited. I have things to do, topics to research, books to read, papers and books to write. And I’m doing it all while working a job as a bar manager. Of course, I want to exit the hospitality industry at some point so I can work full-time+ (i.e., 40+ hours per week) just on my research. I have faith that that will happen. But even if it doesn’t, I’m happy doing what I do on a daily basis. I’m inching toward my goals and crossing off the ones you see for public consumption.

I could talk forever about the tens of books I’ve read and the hundreds of videos I’ve watched regarding personal development since I’m constantly consuming this material. Crafting this mindset within myself is what keeps me going since my goals, whether short- or long-term, span decades. The philosophy of personal development is what’s keeping me going. I’m becoming a better version of myself each day. This is what I would have told the first and second year PSTS students.